Teratogens and Their Effects 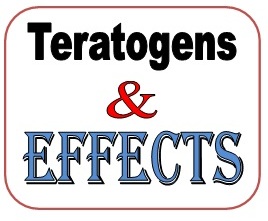 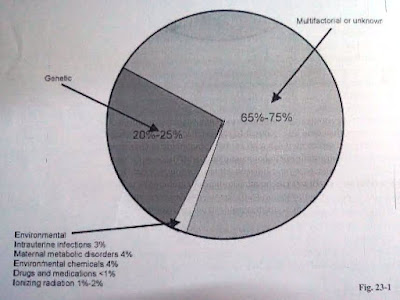 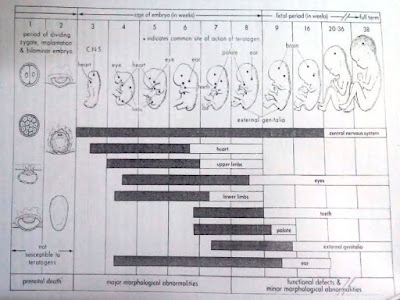 Teratogenic agents cause approximately 7% of congenital malformations. Ateratogenic agent is a chemical, infectious agent,physical condition, or deficiency that, on fetal exposure, can alter fetal morphology or subsequent function. Teratogenicity depends upon the ability of the agent to cross the placenta. Certain medications such as heparin cannot cross the placenta due to its high molecular weight and are therefore not teratogenic. The embryo is most susceptible to teratogenic agents during periods of rapid differentiation. The stage of development of the embryo determines susceptibility to teratogens. The most critical period in the development of an embryo or in the growth of a particular organ is during the time of most rapid cell division. The critical period for each organ is pictured below (Fig. 23-2). For instance, the critical period for brain growth and development is from three to 16 weeks. However the brain's differentiation continues to extend into infancy. Teratogens can produce mental retardation during both embryonic and fetal periods (Fig. 23-2) Specific types of major malformations and the times of usually associated with with expodevelopment sure to the teratogenic agent are outlined in the table below (Table 23-1)Each organ of an embryo has a critical period during which its development may be disrupted. The type of congenital malformation produced by an exposure depends upon which organ is most susceptible at the time of the teratogenic exposure. For instance, high levels of radiation produce abnormalities of the central nervous system and eyes specifically at eight to 16 weeks after fertilizaological timetables such as the one above are helpful in studying the etiology of human malformations. However, to that malformations always result from a single event occurring during a single critical sensitive period or that one can determine the exact day on which a malformation was produced.

A teratogen is any agent that can induce or increase the incidence of a congenital malformation Recognition of human teratogens offers the opportunity to prevent exposure at critical periods of development and prevent certain types of congenital malformations. In general, drugs. food addi and pesticides are tested to determine their teratogenicity to minimize exposure of pregnant Women to teratogenic agen To that a specific agent is teratogenic means the frequency of congenital malformations in women exposed to the agent is prospectively greater than the background frequency in the general population. These data are oftentimes not available for humans and thus cannot be determined in an unbiased fashion. Therefore, testing is often done in animal models and often times administered at higher than the usual therapeutic doses. There are clearly species differences between teratogenic effects, limiting this testing in animals. Based upon either anecdotal information on exposures in humans or on the basis of testing in animals, drugs are classified as to their teratogenic potential. It should be emphasized that less than 2% congenital  malformations are caused by drugs or chemicals. are small numbers of drugs that have been positively implicated as teratogenic agents that should be avoided either during or prior to conception. However, because of the unknown, subtle effects of many agents. women preparing to conceive or already pregnant refrain from taking any medications that are not absolutely necessary. 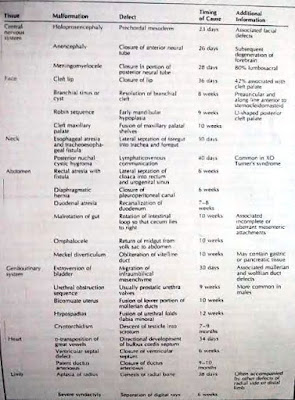 Women are especially urged to avoid using all medications during the first 8 weeks after conception unless there is a strong medical reason. Effects of teratogens during this period of developmental often times results in an "all or none effect." That is, the effect of the teratogen, if it is to have any effect, will be so profound as to cause a spontaneous abortion.some examples of teratogens known to cause human malformations are listed in the table below (Table 23-2). A few of the most common examples will be discussed below.

Nicotine does not produce congenital malformations but nicotine does have a effect on fetal growth. Maternal smoking is a well-established cause of intrauterine growth restriction. Heavy cigarette smokers were also more likely to have a premature delivery. Nicotine constricts uterine blood vessels and causes decreased uterine blood flow thereby decreasing the supply of oxygen and nutrients available to the embryo. This compromises cell growth and may have an adverse effect on mental development.

Alcohol is a common drug abused by women of childbearing age. Infants born to alcoholic mothers demonstrate prenatal and postnatal growth deficiency, mental retardation, and other malformations. There are subtle but classical facial features associated with fetal alcohol syndrome including short palpebral fissures, maxillary hypoplasia, a smooth philtrum, and congenital heart disease. Even moderate alcohol consumption consisting of 2 to 3 oz. of hard liquor per day may produce the fetal alcohol effects. Binge drinking also likely has a harmful effect on embryonic brain developments at all times of gestation.

Tetrasxcline, the type of antibiotic, can cross the placental membrane and is deposited in the embryoin
bones and teeth. Tetracycline exposure can result in yellow staining of the primary or deciduous teeth and diminished growth of the long bones. Tetracycline exposure after birth has similar effects.
Anticonvulsant agents such as phenytojn produce the fetal hydantoin syndrome consisting of intrauterine growth retardation, microcephaly, mental retardation, distal phalangeal hypoplasia, and specific facial features. 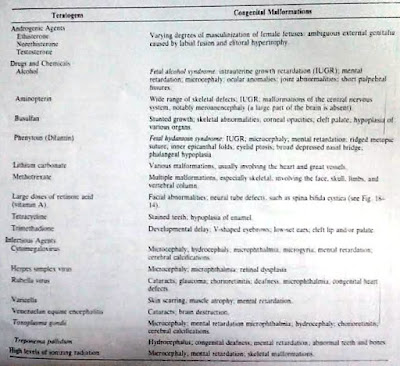 Anti-neoplastic or chemotherapeutic agents are highly teratogenic as these agents inhibit rapidly dividing cells. These medications should be avoided whenever possible but are occasionally used in the third trimester when they are urgently needed to treat the mother.

Rerinoic acid or vitamin A derivatives are extremely teratogenic in humans. Even at very low doses oral medications such as isotretinoin. used in the treatment of acne, are potent teratogens. The critical period of exposure appears to be from the second to the fifth week of gestation. The most common malformations include craniofacial dysmorphisms, cleft palate, thymic aplasia, and neural tube defects
The tranquilizer thalidomide is one of the most famous and notorious teratogens. This hypnotic agent was used widely in Europe in 1959. afer which an estimated 7000 infants were born with the syndrome or meromelia. The characteristic features of this syndrome include limb abnormalities that span from absence of the limbs to abnormally shortened also malformations of other organs including absence of the internal and external ears, hemangiomas, congenital heart disease, and congenital urinary tract malformations. TheErifical period of exposure appears to be 24 to 36 days after fertilization.

Infectious agents can also cause a variety of birth defects and mental retardation when they cross the placenta and enter the fetal blood stream. Congenital rubella or German measles consists of the triad of cataracts, cardiac malformation, and deafness. The earlier in the pregnancy that the embyro is exposed to maternal rubella, the greater the likelihood that it will be affected. Most infants exposed during the first four to five weeks after fertilization will have stigmata of this exposure. Exposure to rubella during the second and third trimester results in a much lower frequency of malformation, but continues to pose a risk of mental retardation and hearing loss


Congenital cytomegalovirus infection is the most common viral infection of the fetus. Infection of the early embryo during the first trimester most commonly results in spontaneous termination. Exposure later in the pregnancy results in intrauterine growth retardation, micromelia, chorioretinitis, blindness, microcephaly, cerebral calcifications, mental retardation, and hepatosplenomegaly.

Ionizing radiation can injure the developing embryo due to cell death or chromosome injury. The severity of damage to the embryo depends on the dose absorbed and the stage of development at which the exposure occurs. Study of survivors of the Japanese atomic bombing demonstrated that exposure at 10 to 18 weeks of pregnancy is a period of greatest sensitivity for the developing brain.There is no proof that human congenital malformations have been caused by diagnostic levels of radiation. However, attempts are made to minimize scattered radiation from diagnostic procedures such as x-rays that are not near the uterus. The standard dose of radiation associated with a diagnostic x-ray produces a minuscule risk to the fetus. However, all women of childbearing age are asked if they are pregnant before any exposure to radiation.

Matemal medical conditions can also produce teratogenic risks. Infants of diabetic mothers have an increased incidence of congenital heart disease, renal, gastrointestinal, and central nervous system malformations such as neural tube defects. Tight glycemic control during the third to sixth week post-conception is critical. Infants of mothers with phenylketonuria who are not well controlled and have high levels of phenylalanine have a significant risk of mental retardation. low birth weight, and congenital heart disease.

Mechanical forces can also act as teratogens. Malformations of the uterus may restrict fetal movements and be associated with congenital dislocation of the hip and clubfoot. Oligohydramnios can have similar results and mechanically induce abnormalities of the fetal limbs. These abnormalities would be classified as deformations or abnormal forms, shapes, or positions of body parts caused by physical constraints. Amniotic bands are fibrous rings and cause intrauterine amputations or malformations of the limbs as well. These abnormalities would be classified as disruptions or defects from interference with a normally developing organ system usually occurring later in gestation.
Most common congenital malformations have familial distributions consistent with minheritance. Multifactorial inheritance may be presented by a model in which liability to a disorder is a continuous variable that is dependent on a combination of environmental and genetic factors.

Development of the malformation is dependent upon passing a threshold that is the sum of a combination of many of these factors. Traits that demonstrate this mode of inheritance include cleft lipcleft palate, neural tube defects, pyloric stenosis, and congenital dislocation of the hip.