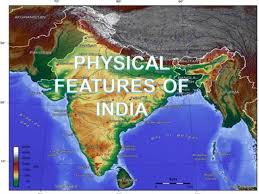 1. Which Longitude reference to Indian standard time? Why?
Answers :: 1. 82030' East Longitude is considered as Indian Standard Time. 2. Because it passes through middle of the country.

3. What is Doab?
Answers : The Fertile land between the two rivers is called as Doab

5. What is a Dun? Give Examples?
Answers :  The valleys lying between the Lesser Himalaya and Shivalik ranges are called as DUNS.
Example: Dehradun, Kotlidun, Patlidun

6. What are the important Valleys and hill stations in Himalayan region?
Answers :
1. Valleys -
a) Kashmir
b) Kangra
c) Kulu
2. Hill Stations -
a) Simla
b) Mussorie
c) Nainital
d) Raniket

7. What is a Terai?
Answers :. A swampy and marshy region is called Terai

8. What are Shivaliks? What do they consist of?
Answers : 1. The southern most range of the Himalayas are called Shivaliks.
2. These Consists of thick gravel and alluvium

11. What is 'Bhabar'?
Answers : The gravel and pebble sediments deposited by the Himalayan rivers at the foot of Shivaliks is known Bhabar.

13. Which Indian islands are volcanic Origin?
Answers :: Narkondam and Barren or Andaman and Nicobar

18. Name the place thruogh which the standard Meridian of India pass.
Answers : The 82 1/20 E Longitude taken as the Standard Meridian in India. It passes through Allahabad in Uttar Pradesh.

2. The Indo - Gangetic plain is fertile and excellent for farming

3. It makes heaven for farmers to grow wheat and rice.

6. It comforts large number of people to get employment

2. The sun rises two hours earlier in Arunachal Pradesh as compared to Gujarat in the west. But the clocks show the same time. How does this happen.
Answers ::
1. The time is measured based on the Longitude

2. It takes 4 minutes for the suns position to move one longitude

3. So, the time is different for each degree of Longitude.

4. Tw different places in our Country will have different times, which cause a lot of confusion

5. To avoid this confusion of time from place to placr 82030' E longitude is taken as standard meridian of India and serves as Indian Standard Time.

2. The rivers in this region are perennial and supply water throughout the year for agriculture

3. The topography of the plains are well suitable for irrigation

4. The plateau region do not support agriculture as the soils are not fertile.

5. The rivers are not perinnial and so the plateau region is dry.

6. The topograhy of the plateau makes irrigation difficult.

4. If the Himalayas would have not been in its present position how would be the climatic conditions of the Indian sub Continent?
Answers :
1. The formation of the Himalayas influence the climate in various ways.

2. They act as natural barriers protecting the great plains of India from the cold winds of Central Asia during winter

3. The Himalayas are reason for summer rains and monsoon type of climate in regions that are beyond the western ghats of India.

4. In the absence of Himalayas India would have remained driver.

5. There would not have been any perinnialriver system without himalayas.

6. The formation of Alluvial Soils would not have been taken place.

7. India would have been a tropical desert.